You are here: Home / Why Do Doga? Practicing Yoga With Your Dog. / FOR USE WITH US-PETS-OFFBEAT-YOGA Raele 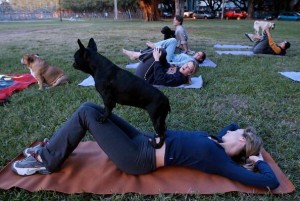 MIAMI BEACH, UNITED STATES: FOR USE WITH US-PETS-OFFBEAT-YOGA Raelene Mercer lies on her mat as her five-year-old dog, Montana, balances on her body during a “dog yoga” session at a local park in Miami Beach, Florida, 20 January, 2004. One afternoon of every month a small group of dog owners join yoga instructors to enjoy Yoga with their dogs. The “doga” or “ruff yoga” as it has come to be known was launched in New York. AFP PHOTO/Roberto SCHMIDT (Photo credit should read ROBERTO SCHMIDT/AFP/Getty Images)